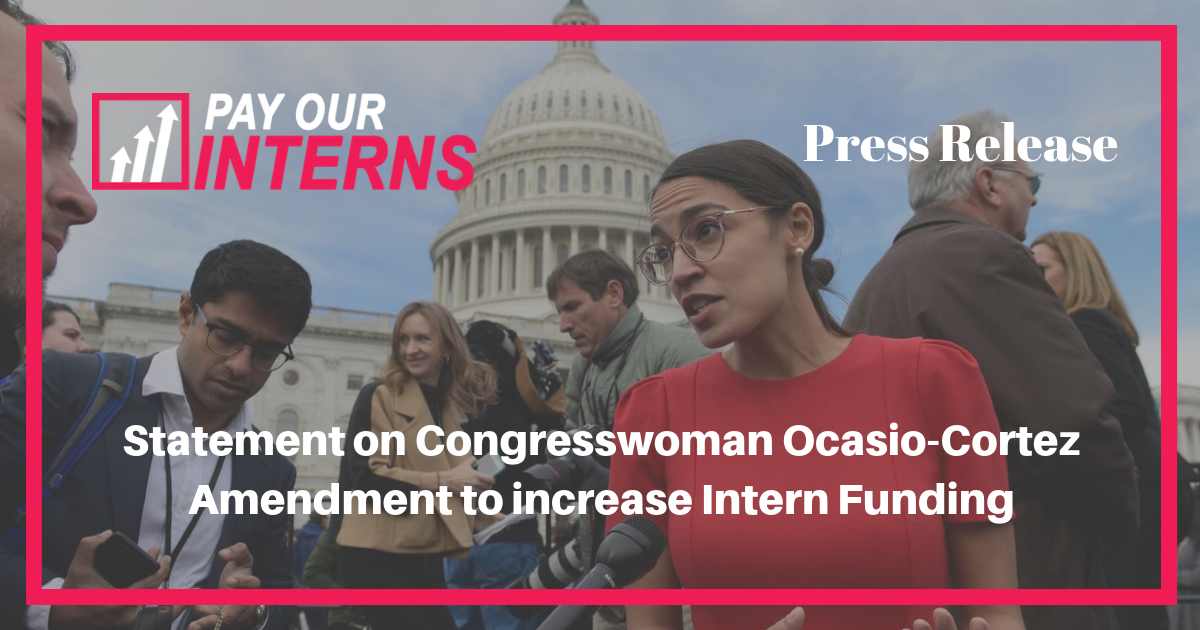 Washington, D.C. – Last September, the House of Representatives supplied $8.8 million to fund congressional internships, which will create thousands of paid opportunities for young adults regardless of their socioeconomic status. Earlier this session, Rep. Tim Ryan, one of the leaders of this issue announced there would be a 29 percent increase for the 2020 intern fund. Last week, Congresswoman Alexandria Ocasio-Cortez introduced an amendment that would supply an additional $8 million on top of Rep. Ryan’s proposed increase. The proposal would total the intern fund at over $19 million.

The amendment will increase the current allowances available to representatives that they can use to compensate interns.

The following statement is attributable to Guillermo Creamer, Co-Founder of Pay Our Interns:

“Pay Our Interns is concerned that the current $20,000 in funding that each House office can spend on interns is not enough to completely eliminate unpaid internships. At its current funding level, several offices provide both unpaid and paid internships, while some offices have all together forgone touching the available funds. Through this amendment introduced by Rep. Ocasio-Cortez, each office would receive over $43,000 in funding for their intern program. This major increase would ensure that all congressional interns receive similar pay, and could potentially even fund those programs in local District offices.

“We are excited to work with Congressional offices on this endeavor and commend Rep. Ocasio-Cortez for introducing this amendment. For too long, congressional internships were available to the students whose families could afford to support them while they worked for free. Lawmakers are realizing that shift the power dynamics in Washington, it will have to start from the intern level, and if we continue with our current inequitable structure, we will never achieve change. With the additional funding for internships, more people will have the opportunity to work in congressional roles without foregoing meaningful income.”

Pay Our Interns is a 501(c)(3) non-profit organization that advocates for more paid internships and expanding workforce development opportunities among youth. A student’s socioeconomic status should not be a barrier to getting real-world work experience.  POI is headquartered in Washington, D.C. For more information visit www.payourinterns.com