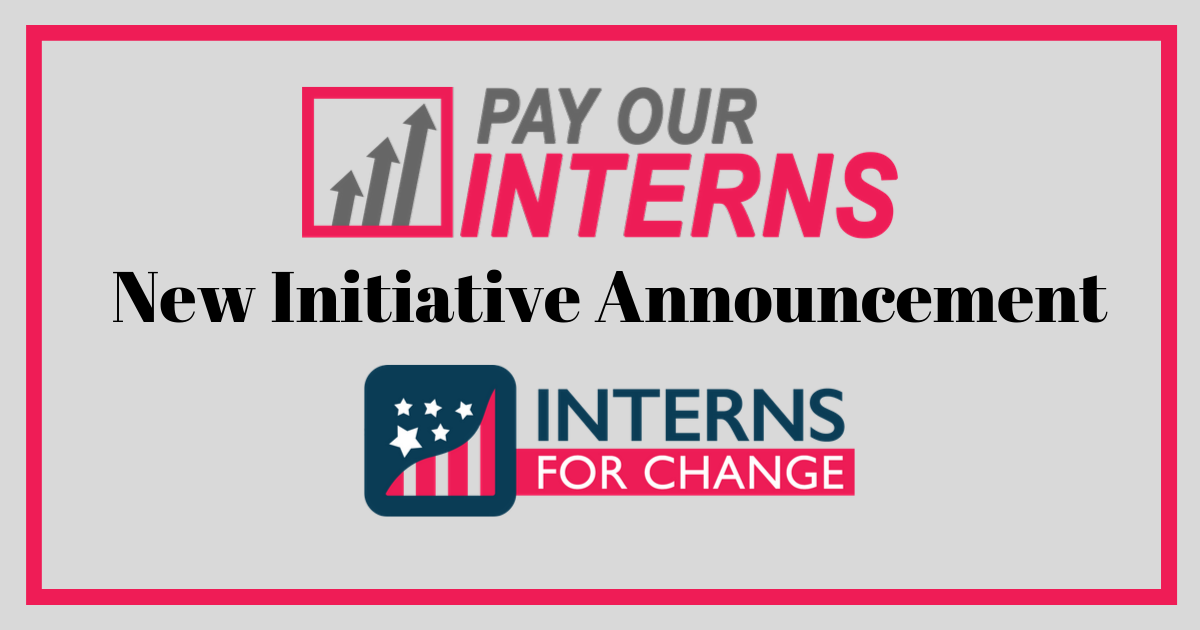 Washington, D.C. – At the beginning of the month Pay Our Interns (POI) celebrated three years of success. The organization was first started as a social media campaign effort launched by two former unpaid interns in D.C. Since launching, POI has successfully advocated for thousands of paid internship opportunities, most focused within the government and the Halls of Congress. Most recently POI was approached by a group of unpaid interns who came with an idea to expand the impact of the organization. POI understands that unpaid internships are not just a D.C. problem, and they are not just a government issue; they are an injustice that extends deep in our society throughout various sectors of the workforce.

The group of current unpaid interns and POI have collaborated together to launch #InternsForChange, an initiative that aims to shed light on the injustices created by unpaid internship programs. To kick-start the initiative, a coalition of student leaders and organizations across the Washington, D.C. area have joined efforts to put on the #InternsForChange Rally which will take place on November 20th in Freedom Plaza, Washington D.C. from 9am – 11am. The rally has been granted a permit by the National Park Services under the first amendment.

“We are organizing young people in DC and around the nation to host a demonstration on the inaccessibility of internships across America and promote the idea that interns deserve compensation for their work. We are excited to be joined by Leah Greenberg, Co-Executive Director of Indivisible who will emphasize the importance of paying interns and its effects on the future workforce. We are also actively talking to several members of Congress in coordinating their participation at the rally,” shared Guillermo Creamer, co-founder of Pay Our Interns.

Pay Our Interns invites all interns across Washington, D.C. to stand in solidarity and advocate for more equitable opportunities in one unified voice. No one should have their aspirations for personal and professional growth curtailed by economic or social instabilities. “This movement is bigger than all of us alone. We know that, together, we can work to create a country where every American has the opportunity to intern without concern for economic barriers. In addition, as the next generation of change, we want this rally to highlight the importance of the youth voice; this is why we will also be registering attendees to vote, empowering young people to develop a greater degree of agency. We look forward to standing with fellow young people and amplifying the message that the future of internships are paid,” said Griffen Saul, the initiative founder and coordinator.

Pay Our Interns is a 501(c)(3) non-profit organization that advocates for more paid internships and expanding workforce development opportunities among youth. A student’s socioeconomic status should not be a barrier to getting real-world work experience. POI is headquartered in Washington, D.C. For more information visit www.payourinterns.org